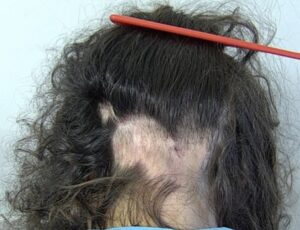 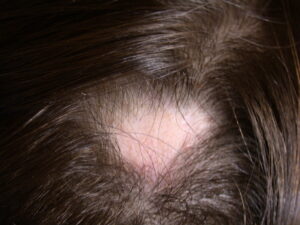 See FAQs at the bottom of the page.

Alopecia areata is a hair loss disorder that is mediated by the immune system. Both males and females of all ages and ethnicities may develop alopecia areata. Any hair-bearing region of the body can be affected. The most common clinical presentations are called alopecia areata, alopecia totalis, and alopecia universalis. The term alopecia areata is used when there are round to oval patches of hair loss present. Alopecia totalis refers to loss of all scalp hair and alopecia universalis to loss of all scalp and body hair. Nail abnormalities are commonly seen in association with hair loss. Abnormalities may range from pitting (small dot depressions in the nail plate) to thinning of the nail plate, and very rarely, shedding of the nail plate. The prevalence of alopecia areata in the United States is estimated to be 1.7% for a total of approximately 4.6 million affected individuals.

The hair loss that occurs in alopecia areata may appear suddenly with no symptoms or there may be mild itching or tingling. Hair fibers usually fall out by their "roots," an event that occurs with normal daily hair loss but in alopecia areata, the numbers of fibers in the loss phase are significantly increased especially in the involved areas. After shedding occurs, regrowth usually does not proceed quickly and the involved areas may remain bald for some time. This is not because the hair follicle has been destroyed but rather either an "arrest" of hair growth or a prolongation of the resting phase in the hair cycle occurs.

Dermatologists have learned over the years that a characteristic feature seen under the microscope in scalp biopsy samples from patients with alopecia areata is the presence of inflammatory cells (immune cells) around the bottom part of affected hair follicle. The most common cell present is a white blood cell called a T lymphocyte. Many researchers have focused their attention on studying the interaction of these inflammatory cells, and in particular, the T lymphocyte with the hair follicle. Researchers continue to study how immune cells "effect" the hair follicle to interrupt hair growth and what triggers this aberrant behavior.

Genetic factors have also been shown to be important in the susceptibility, development , and severity of alopecia areata. Alopecia areata affecting more than one family member has been reported to range between 10 and 50 percent in published studies. Alopecia areata has been reported to occur concurrently or sequentially in both identical and fraternal twins. The concordance rate or genetic effect in alopecia areata is believed to be 55 per cent, which means environmental factors have the potential to also play a significant role in this hair disease. Current data also suggest there are differences in a major locus on chromosome 6 between patients with long-standing extensive alopecia areata and those with limited, patchy disease of short duration. Researchers continue to conduct family studies of alopecia areata to better understand the genetics of this disorder. Patients and families now also have the opportunity to participate in the National Alopecia Areata Registry. A major goal of the Registry is to create a database where researchers can obtain epidemiologic data and blood samples from patients and families with alopecia areata. Data will be used to identify genetic and environmental factors important to alopecia areata. In the future, the Registry will also be a resource of biologic research samples and clinical data for other studies of alopecia areata.

Therapy for alopecia areata must be considered against the background of the normal course of the disease. Ninety percent of patients with limited (<25%) scalp involvement with alopecia areata experience spontaneous regrowth within 2 years. This group also generally responds favorably to a variety of treatments. On the other hand, the presence of severe nail abnormalities, atopy (asthma, allergic rhinnitis, and atopic dermatitis), and onset less than 5 years old with extensive hair loss, have all been implicated as negative prognostic factors. Alopecia totalis or universalis which lasts for > 2 years is believed to have a particularly low chance of spontaneous regrowth and is less responsive to therapy.

The most commonly prescribed medications for limited patch stage alopecia areata include anti-inflammatory medications, including topical or intralesional steroid injections. Topical 2% or 5% minoxidil may also be prescribed to promote hair growth. Unlike its use in male or female pattern baldness where one has to keep using the drug to maintain hair growth, topical minoxidil need only be used for as long as it is needed in the management of alopecia areata ie discontinuation of the drug after full regrowth is not commonly associated with renewed hair shedding.

The management of extensive alopecia areata is more challenging as patients may or may not respond to therapy. Different treatment options include the aforementioned medications as well as oral corticosteroids or psoralen plus ultraviolet A light (PUVA). Topical immunotherapy with diphencyprone and squaric acid dibutylester is used extensively in some parts of the world: these are not drugs per se but rather chemicals and thus there are not FDA approved preparations. For this reason, many of the dermatologists in the US do not feel comfortable using them. Many new drugs are currently being investigated for the treatment of both extensive and patchy alopecia areata. Overall, the future looks bright for the development of new, effective treatments for alopecia areata.

Patients and physicians can keep informed about alopecia areata and advances in this disease at the AHRS web site as well as through the National Alopecia Areata Foundation (NAAF) (NAAF.org). Support groups and tips on wigs or other means of camouflaging hair loss are available through NAAF. Individuals with alopecia areata interested in participating in the Registry, should log on to www.alopeciaareataregistry.org and complete the Tier 1 questionnaire. Information in the questionnaire is then entered into the central database at MD Anderson Cancer Center. Selected participants will be invited to one of the five participating Registry sites - MD Anderson Cancer Center in Houston, the Universities of California (San Francisco), Colorado (Denver) or Minnesota (Minneapolis), or Columbia University in New York City. At this visit, a detailed history and clinical examination will be done, a more detailed questionnaire completed and blood samples obtained.

The following are frequently asked questions on alopecia areata. The information provided is not meant to be a substitute for the information obtained at an evaluation and by discussion with a physician, but merely to encourage understanding of this condition. No questions regarding individual scenarios will be answered by the AHRS. No changes in treatment should be undertaken by a patient without discussion first with the patient's physician.

Why did I develop this problem?

I have no family history of hair loss. Alopecia areata is considered to be an autoimmune disease. In alopecia areata, this means that immune system cells called white blood cells attack hair follicles. Hair fibers are shed and the hair follicle/hair fiber growth process is slowed down. Genetic factors may be important in disease susceptibility and severity but overall, scientists do not know exactly why the immune system attacks hair follicles in some people. In those who are genetically predisposed, it is possible some type of trigger, such as something in the person's environment or a virus, triggers the attack on the hair follicle.

Do I need to have blood tests or X-rays done to determine if there are internal problems too?

Alopecia areata may occur more commonly in people who have other autoimmune diseases such as thyroiditis, Addison's disease, and pernicious anemia (Vitamin B-12 deficiency). Therefore, it is important your doctor take a careful medical history and obtain any necessary blood tests based on your medical history and physical examination.

I've been told no treatment effects the natural course of this disorder. Is that true?

There is no "cure" for alopecia areata and in the United States there are no specific drugs which are approved specifically for the treatment of this disease. There are however, medications which are commonly prescribed to promote hair growth or to reduce the inflammatory (autoimmune) reaction around hair follicles. Your dermatologist will be familiar with these medications and how to use them in the management of alopecia areata.

My child is only 5 years old and has alopecia totalis. Is he likely to regrow his hair?

This is a difficult question to answer as the course of the disease varies from person to person. Your child may regrow his hair spontaneously and never have another episode of hair loss again or he may regrow his hair only to lose it again later with a recurrent episode of alopecia areata. Some people with alopecia areata may never grow back their lost hair. Medical treatment of his alopecia totalis may help him regrow his hair but again one cannot guarantee the alopecia areata will not recur. From published research studies, it appears the outlook or prognosis for hair regrowth will be positive if the disease has been present for less than two years and your child does not have atopy. Atopy is the term used to describe three major diseases including asthma, allergic rhinitis (hay fever) and atopic dermatitis (eczema). Some, but not all, researchers have reported a worse prognosis if severe nail changes are also present. The nail changes which have been described include thinning of the nail plate and severe pitting and ridging.

I've heard that chemicals can be painted on the scalp to make the hair grow but that we can't get them in this country. Why is this?

Topical sensitizers are medications which when applied topically create an allergic reaction which is characterized by itching and redness. If this therapy works, new hair growth is usually seen in 3 to 12 months. There are three topical sensitizers which are used in medical practice. Their names are dinitrochlorobenzene, squaric acid dibutyl ester and diphenylcyclopropenone. These chemicals are available in the United States but their use in the management of alopecia areata has not been subjected to vigorous testing as required by the Food and Drug Administration. It is anticipated that in the very near future the type of testing required by our government will be initiated in volunteer patients with extensive hair loss.